Warning: "continue" targeting switch is equivalent to "break". Did you mean to use "continue 2"? in /var/www/web26436956/html/naranili.de/wp-includes/pomo/plural-forms.php on line 210
 Tennis • Mein “High School Year Abroad” in den USA
Welcome to my private Blog x

The tennis season offically started on the 27th of February, but not for me because I had to recover from a bad flu. Furthermore, the Basketball team had their semi-final and at the end final game in the Gill Stadium at OSU. Sadly the did not win the final game of the Play Offs, but it was a great performance from either sides. But now back to tennis. Consirdered to my amount of missed practices I played JV the first couple of pre-season matches. The next one I played 4. Double Varsity. For the first District match we had to travel all the way to Madras which is on the other side of the Cascade Mountain Range. Sadly I didn’t play because I missed practices during spring. But from there on I played about every match. Sometimes singles and sometimes Doubles. I personally prefer Singles, but Doubles can get a lot more fun if you partner and you get along well. Since I had a lot of fun playing Doubles with a friend I didn’t care what I would play for the final District Tournament. Altough we were messing around most of the time, we still won every single match. For District Tournament I ended up playing Singles against the first guy of another school. I didn’t play very good at the beginning; therefore, I lost my first set. The second set was close, but my oponent had the better shots at the end. And I am not gonna talk about the second match I had; simply, because I played awful. :-). At the end it was a great Tournament. 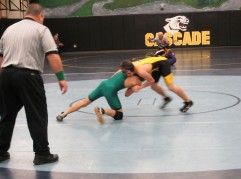 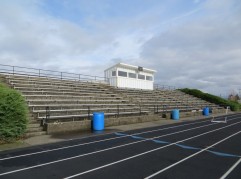